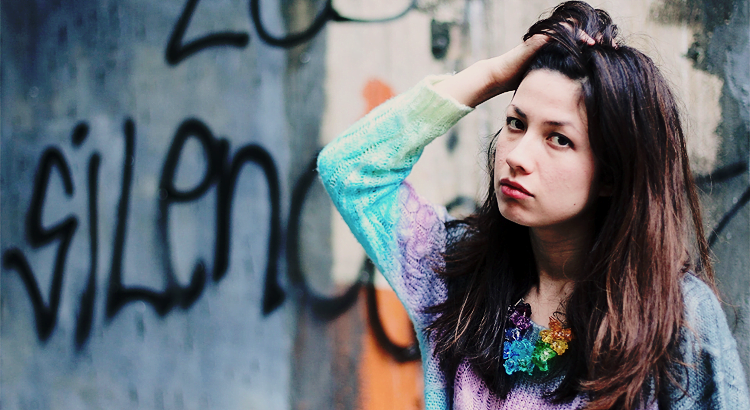 In the music industry, and in the folk genre particular, breakup songs are not exactly uncommon, and for every chart-topping artist crooning over the radio about the throes of love, there are thousands of disconsolate teens pouring over their guitars. For her 2009 Edward EP, England-based singer-songwriter Emma-Lee Moss (stage name Emmy the Great) visits the genre herself; the four included songs are among Emmy’s earliest, though they contain her usual balance of charm and poignancy, more often than not accompanied only by an acoustic strum.

Though she rather spontaneously released Edward after her début album, First Love, Edward nonetheless functions as a prequel to First Love, as the two share the ubiquitous themes of love, death, and sex.  It is within the elegiac third track, “Canopies and Drapes”, that Emmy explores the uniquely teenage voice and experience of losing one’s first love.

The maudlin emotions of a teenager in love are all too frequently dismissed by the older and wiser, who attribute those feelings to the undulations of hormones — and that genuinely may be their source, but they are nonetheless legitimate to the teens experiencing them, a reality that those who have survived adolescence must not forget.  The song’s bathetic speaker laments early on that she “hate[s] the day,  it hates me, [and] so does everybody else,” an almost cliché embodiment of the heartbroken teen. Yet it is the teenagehood of the speaker and the song that makes it so endearing, as it captures and honors a teen in search of identity, attention, and closure, whose youth affords her only one frame of reference for her misery: that she “feel[s] worse than when S Club 7 broke up.” As she absently watches “another routine episode of Friends,” she forms her conception of adulthood from its characters, wondering if her future life will be filled with “feelings, coffee, and ‘I’ll be there for you’.” This references not only how teens build their perceptions of reality from the media — an idea echoed through the song — but also how she struggles to define herself and her life when  “[I have] loved you so long, I don’t know who I’d be without.”

Musical references make a reappearance a few verses later, and serve as outlets for her sorrow — songs to cry to and relate to, artists to accompany her in the lonely days that follow. And yet, she cannot separate certain albums and movies from their roots in or resemblance of her relationship, and they become mementos of her beloved boy.

Wish I could tell you all the things Woody Allen helps me see,
How Annie Hall is beginning to feel quite a lot like you and me.
It took a while to come around to David Bowie’s new CD,
And it’s much too late to give back your Magnetic Fields EP.
Can I keep it by my pillow?
Really loved it…
How I long to tell you so.

This desperation for contact with her ex repeats through the song, craving their lost intimacy and companionship; while they are not proud moments for us, I’m sure most would admit to having scrolled through an ex-lover or crush’s Facebook photos and tweets, desiring to know what they’re up to and, perhaps most importantly, who they’re up to it with. The speaker quenches her thirst, literally and metaphorically, and dejectedly attempts to gain her ex’s attention in the following verse:

Later on me and a bottle will hook up to have some fun,
Then I’ll call your house at twelve to let you know that I’m drunk,
Say ‘I’m sorry Mr. C, I was just looking for your son,
How is he, incidentally do you know if he’s out alone?
There is this book he lent to me something like seven months ago,
I’m gonna burn it in the street, be so kind as to let him know that I’m dealing with this badly,
and could he please get back to me?’

There’s a bitterness here, a selfish hunger to not be alone in her downward spiral; in short, a desire to stop him from moving on, to ensure he also experiences the hurt she is so overcome by.

Keeping to form, the song ends with forward steps; she sleeps, dreaming of the titular “canopies and drapes,” and “wake[s] shaking from the knowledge that the mattress holds your shape.” She gradually replaces her acidity and need for attention with a desire for closure, illustrated by the image of a funeral, where she hopes once again to see her ex, but this time to “give back your music and your tee-shirts and your socks.” She begins to project into the future, where the speaker’s voice becomes more mature, and Emmy’s idyllic, poetic songwriting abilities shine through:

[I’ll] walk to Jazz’s house in Soho, cry into her letterbox,
Take some time out to resuscitate my soul,
Take up smoking and drink carrot juice and grow,
Teach the mattress to erase you from its folds,
Then dry my eyes and keep on moving ’til the motion makes me strong,
Until one day I realize I don’t remember that you’re gone.
We’ll be strangers who were lovers,
I’ll recover,
It’s so weird how time goes on.

The song therefore coalesces into a story of growing up, of how the solitude and sorrows of teenage years eventually fade as we learn to leave them behind. There’s a dual temporality to that final line, the teenage speaker projecting into the future and realizing that her current state will not be forever — despite what it seems in the moment — and that she will eventually move on, and her future-self reflecting backwards on how such an awful experience — one that changed her and plagued her — can then seem as if it happened centuries ago, to a completely different person. The final lines are well-placed as the last Emmy sings on Edward because they truly epitomize the EP. These are songs and emotions Emmy wrote and felt long ago, and Canopies and Drapes is able to, in equal parts, be a rumination on those emotions, while also nostalgically celebrating both their extremity and legitimacy, their place in her development as a woman and as a songwriter. The poignancy and power of Edward, Emmy admits, reawakened her love for songwriting, an effect I can certainly rejoice about — because she’s damn good at it.

Edward does not seem to be available for purchase anywhere, new or used, any longer, but its tracks are available on the Deluxe release of First Love. Emmy the Great has since released an album, Virtue, in 2011, and a Christmas collaboration in 2011. Though a junior studio album has yet to be announced, her new song, “Swimming Pool”, is available on her website.

2 comments on “Canopies and Drapes: Emmy the Great’s Twist on the Classic Breakup Song”