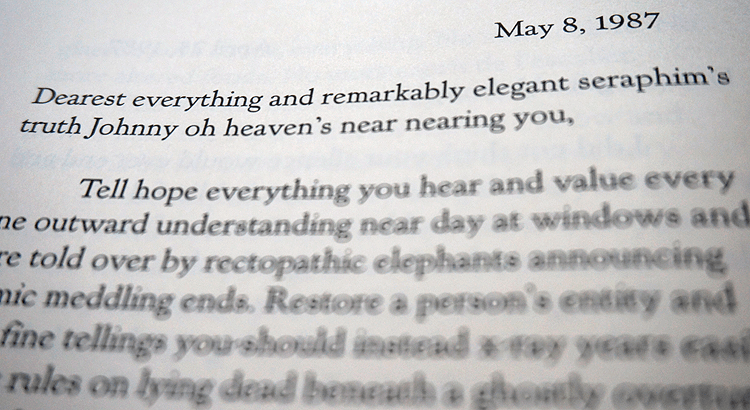 I’ve picked up House of Leaves again, Mark Z. Danielewski’s debut novel and veritable puzzle of a book. I previously abandoned it because, as a horror novel, I was having some trouble sleeping after reading it, but I’ve wanted to read it for years and the new year seems like a good time to conquer my fears.

There’s plenty of discussion around the internet regarding the book, and plenty more people who, I’m sure, have decoded the book’s many coded messages. But I’m a stingy sort who likes to do things on my own, and I thought I’d log some of it here! The first of my challenges was a letter from Appendix II-E, sent to Johnny Truant from his mother; she suspects that the director of the Whalestoe Institute, where she is institutionalized, is intercepting her letters. She is able to send a private letter to Johnny via an attendant, telling him the key to her next letter: take only the first letter of each word, separate those letters into something coherent, and find her true message (the letter itself is pure nonsense). Therefore, it’s no significant discovery on my part, but more of a fun first challenge. Warning that this is a book of psychological horror, and the contents below may be troubling or triggering (esp. for rape victims).

I won’t bother re-typing the entirety of the letter because, as I said, it’s nonsensical. However, when the first letter of each word is taken, I’ve come up with the following message.

They have found a way to break me. Rape a fifty-six year old bag of bones. There is no worse and don’t believe otherwise.

The attendants do it. Others do it. Not every day, not every week, maybe not even every month. But they do it. Someone I don’t know always comes. When it’s dark. Late. I’ve learned not to scream, screaming gave me hope and unanswered hope is shattered hope. Think of your Haitian. It is far saner to choose rape than shattered hope. So I submit and I drift.

I let caprice and a certain degree of free association take me away. Sometimes I’m still away long after it’s done, after he’s gone — the stranger, the attendant, the custodian, the janitor, cleaning man, waiting man, dirty man — the night tidying up after him.

I’m in hell giving into heaven where I sometimes think of your beautiful father with his dreamy wings and only then do I allow myself to cry. Not because your mother was raped (again) but because she loved so much what she could never have been allowed to keep. Such a silly girl.

You must save me Johnny. In the name of your father. I must escape this place or I will die.

I love you so much.

You are all I have.

In addition, throughout the letter, letters are capitalized in the middle of words (ex. ‘froWned’). When those letters are collected, it spells the following message.

A face in a cloud no trace in the crowd

(This omits the MAN from “Man and Nam,” which have appeared between the o and w of ‘crowd.’ I have found no solution to their capitalization — yet?)

The phrase felt familiar once I found it, so I googled it, despite my resolve to figure out the puzzles myself (if possible) — I received only results for House of Leaves — perhaps I read it on tumblr somewhere? — but Google confirmed my suspicion that the Whalestoe Letters contain plenty more secrets to uncover (I’ve not read past the May 8th letter yet). I look forward to unfolding them!